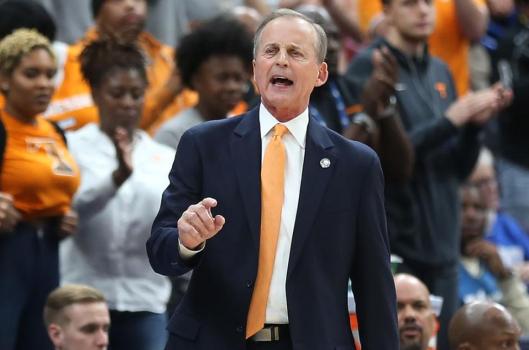 The Hickory Sportsman’s Club is please to welcome the University of Tennessee’s Head Men’s Basketball Coach Rick Barnes back to Hickory.  Tennessee’s fortunes on the hardwood have never looked brighter, as Rick Barnes, the most decorated and accomplished head coach in school history, has led the Volunteers to new heights in his four seasons on Rocky Top. The 2019-20 campaign will be his fifth at Tennessee and his 33rd as a head coach.

Barnes is the reigning Naismith College Coach of the Year after guiding Tennessee to a school-record-tying 31 wins and a Sweet Sixteen appearance in 2018-19. The Vols also authored a program-record 19-game win streak, logged three wins over top-five opponents and spent a month ranked atop both major Top 25 polls.

Tennessee spent the entire 2018-19 season ranked in the top 10 and earned a year-end ranking of No. 5 in the coaches’ poll. That team set single-season school records for assists and blocks and was the first UT team to score more than 3,000 points.

Over the past two seasons, Barnes—who is under contract through 2023-24—has directed the Big Orange to a 57-15 record.

“Rick Barnes is one the game’s elite coaches and a program-changer,” Tennessee Director of Athletics Phillip Fulmer said. “His incredible work here at Tennessee over the past four years illustrates that. Additionally, the impact that he and his wife, Candy, have made throughout this community has been immensely inspiring as well.

“The University of Tennessee and East Tennessee as a whole have developed an enhanced love and appreciation for our men’s basketball program and its culture under Rick’s leadership. Our commitment to basketball has never been stronger, and we’re all excited for the future as we move forward.”

The Vols enter the 2019-20 season riding a school-record streak of 35 straight appearances in the AP Top 25.

The marriage of Barnes’ Hall of Fame-worthy résumé—highlighted by more than 690 career Division I head coaching wins, the seventh-most among active coaches—and Tennessee’s world-class facilities, fervent fan base and outstanding athletic and academic resources, clearly has the Vols poised to consistently compete for championships.

Tennessee was picked to finish 13th in the 14-team SEC prior to the 2017-18 campaign, but Barnes and his staff not only guided the Big Orange to the 2018 regular-season SEC Championship, but also to the title game of the SEC Tournament, a No. 3 seed in the NCAA Tournament and a 26-9 record.

Barnes was named the 2018 SEC Coach of the Year and was runner-up for Naismith National Coach of the Year after Tennessee became one of only eight “Power Five” teams to increase its overall wins total by 10 or more games from 2016-17. The Vols also were one of only eight “Power Five” programs to win at least 13 games away from home in 2017-18, leading to a year-end RPI of No. 10 while playing the 11th-toughest schedule in the country.

Several of Barnes’ players have collected hardware over the last two years. First-round NBA Draft Pick Grant Williams earned unanimous consensus first-team All-America status in 2019 and became the first player since 1995 to be named SEC Player of the Year in back-to-back seasons.

Admiral Schofield claimed All-SEC honors each of his last two seasons, including first-team acclaim in 2019. Point guard Jordan Bone dished out 215 assists on his way to second-team All-SEC honors in 2019, and fellow guard Lamonte Turner was named the SEC Co-Sixth Man of the Year in 2018. Schofield and Bone joined Williams as 2019 NBA Draft picks.

The 2018 Volunteers spent 14 straight weeks in national top-25 polls and finished the season ranked 13th in the Associated Press poll and 16th in the coaches’ poll. The team finished the season rated sixth nationally in defensive efficiency while leading the SEC in scoring defense (65.7 ppg) and assists per game (15.7).

In 2016-17, Barnes took an undersized roster that featured only three upperclassmen and exceeded preseason expectations, as well as the previous year’s overall and SEC win totals. Williams’ stellar play highlighted the collective contributions of the highest-scoring freshman class in program history (1,040 points). Freshmen led the 2016-17 team in nine different statistical categories and were responsible for 44 percent of the squad’s scoring.

In 2015-16, Barnes’ first Tennessee squad was undersized—with an average roster height of 6-4—but he guided those Volunteers to multiple wins over ranked teams and victories over traditional rivals Florida, Kentucky and Vanderbilt.

That season, Barnes personally worked with guard Kevin Punter Jr. on a complete mechanical overhaul of his jump shot, and that endeavor paid huge dividends for the senior, as Punter more than doubled his scoring average from his junior year and finished the season as the nation’s 13th-leading scorer with 22.2 points per game. Punter’s field-goal percentage also rose from .419 to .460 as he earned 2016 All-SEC honors.

In fitting with UT’s mantra of “comprehensive excellence,” Barnes’ commitment to his players’ academic achievement cannot be overstated. His teams have posted a perfect 1,000 score in five of the last six multi-year APR reports as well as perfect single-year APR scores every year from 2005-06 through 2014-15.

Immediately prior to Barnes’ arrival on Rocky Top, he oversaw a prolific, 17-year run at Texas that included 16 trips to the NCAA Tournament.

In 32 overall seasons as a Division I head coach, Barnes has led his teams to 24 total NCAA Tournament berths, seven Sweet Sixteens, three Elite Eights and one Final Four in 2003.

In 2019, he became just the third head coach ever to lead three different Division I programs to the Sweet Sixteen (Clemson, Texas and Tennessee).

His success on the sidelines is simply staggering. He coached Providence to three NCAA Tournament berths in six seasons. He then guided Clemson to the Big Dance three times in four years. And his 17-season stint at Texas featured 16 NCAA appearances.

Not only do his players find themselves perennially positioned to play for national championships, but they also carry themselves with a top-25 swagger. Barnes’ teams have spent 251 total weeks in the Associated Press Top 25, including 118 weeks in the Top 10. Tennessee spent four weeks at No. 1 in 2019—the longest stint atop the polls in program history. His Texas squad earned the program’s first-ever No. 1 national ranking on Jan. 11, 2010. And he had previously coached Clemson to a No. 2 national ranking—the highest in that school’s history—during the 1996-97 campaign.

On the flipside, Barnes has collected 102 career wins over Top-25 opponents. And his squads have toppled Top-10 teams a total of 37 times.

In his four years at Tennessee, the Vols are 6-4 against rival Kentucky and 4-0 vs. the Wildcats in Knoxville.

Nationally respected in player development, Barnes is one of only two coaches in the nation that can claim two different National Players of the Year in the last 17 seasons (T.J. Ford in 2003 and Kevin Durant in 2007). Barnes also has produced five consensus first-team All-Americans and three National Freshman of the Year honorees.

Barnes has coached 27 total NBA Draft picks, including 15 first-round selections. And he has coached eight players who have combined to win a dozen NBA Championships.

Durant—who refers to Barnes as “more than a coach,” but also a “father figure”—was the No. 2 overall pick in the 2007 NBA Draft. Durant has won an NBA Most Valuable Player Award, four NBA scoring titles, the NBA Rookie of the Year Award, and is a two-time Olympic gold medalist and NBA Finals MVP.

“I think Rick is one of the elite coaches in the game,” ESPN college basketball analyst Jay Bilas said. “There is not a better person in the game. He is a man of great character; both his athletic character and his overall character are championship level.

“Rick brings immediate credibility and immediate stability. Rick has always been a rock in his level of his competitiveness, but at the same time being a players-first coach. He’s built programs everywhere he’s been. He’s an amazing guy.”

Barnes was handed the reins to the Tennessee program on March 31, 2015.

A native of Hickory, N.C., Barnes was born on July 17, 1954. He was a standout player at Hickory High, from which he graduated in 1973. Barnes moved on to Lenoir-Rhyne College (Hickory, N.C.), where he lettered for three seasons and won the Captain’s Award for Leadership as both a junior and senior.

He earned a bachelor’s degree in health and physical education from Lenoir-Rhyne in 1977 and was named the college’s Distinguished Alumnus in 1997. Barnes was inducted into the Lenoir-Rhyne College Hall of Fame on Oct. 5, 2002, and received an honorary Doctor of Humane Letters degree from Lenoir-Rhyne on May 7, 2005.

Barnes has a history of generous charitable giving and service not only in his hometown, but also in every community in which he’s resided as a collegiate head coach. In East Tennessee, he plays an active role in supporting the Emerald Youth Foundation and sits on the Board of Trustees.

He and his wife, Candy—who is also a Hickory native—have a son, Nick, and a daughter, Carley. Carley and her husband, Josh Lickteig, have four children: Avery, Caleb, Emma and Isla.