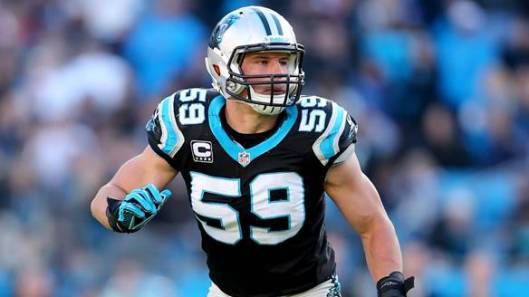 We are proud to announce our spring meeting and what a treat we will have for you. Coming off a great season, one of the Carolina Panthers all time Fan Favorites, All-Pro, 2013 NFL Defensive Rookie of the Year, 2014 NFL Defensive Player of the Year and a terrific team player!!!!

Luke Kuechly is an American football Linebacker for the Carolina Panthers of the National Football League (NFL). He was recognized twice as a consensus All-American while in college.

Luke Kuechly was born on April 20, 1991, in Cincinnati, Ohio. He grew up in Evendale, Ohio. He played college football at Boston College and was recognized twice as a consensus All-American. He was drafted by the Panthers ninth overall in the 2012 NFL Draft. He was drafted by the Carolina Panthers in the first round: the first linebacker selected and the 9th overall pick. On May 10, 2012. He signed a 4-year, $12.58 million contracts. On September 10, 2015, Kuechly signed a 5-year, $62 million extensions with the Panthers, becoming the NFL’s highest-paid middle linebacker by annual average salary.

Luke Kuechly became the youngest recipient of the AP NFL Defensive Player of the Year Award in its history in 2013.

Meetings of the Hickory Sportsman’s Club are closed to only members and their guests.